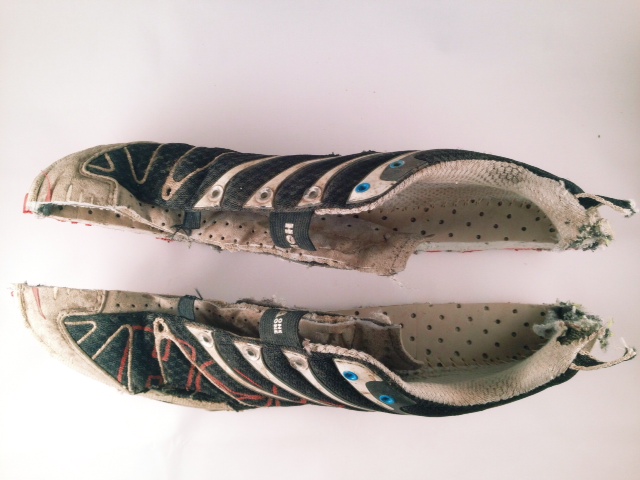 Cutting one of my favorite and expensive (MSRP $170) running shoes in half was difficult but I felt compelled to do it in the name of science… and fun. Like most men, I enjoy sharp steel cutting tools, both electrified and non powered and applying them to new situations. You can imagine the glee on my 7-year-old’s face as he watched his old man wield the saw.

After doing several ultra-marathons I kept noticing guys bouncing along and floating by me on these cloud-like squishy shoes that looked like a cross between a moon boot and a running shoe. I wondered if the extra cushioning might ease some knee pain I had developed.

For me, going from minimalist shoes to these was like sleeping on a yoga mat one night and a Tempur-Pedic the next. I got the shoes pictured here, it worked and I was hooked. 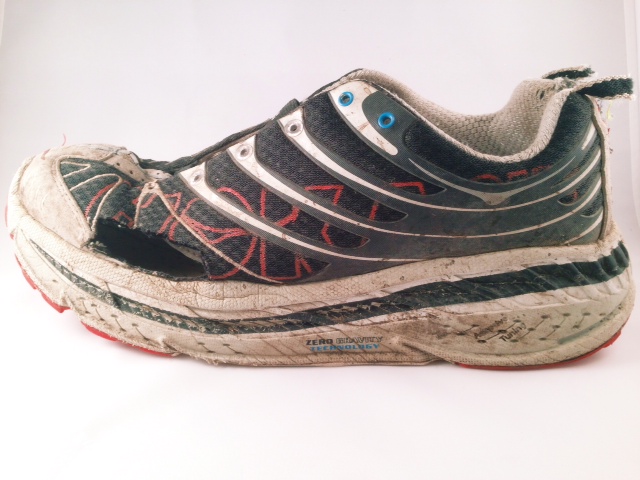 I guess cutting this side hole mid-way through the Hoka’s life was a foreshadowing of the deeper cuts to come.

As you can see the Evo Stinson Trail is a beefy looking although fairly lightweight (about 10.5 oz), cushioned cadillac of a shoe and still proudly exhibits it’s foamy superstructure after 500 miles. You probably can’t help but notice the hole I cut into the side of the shoe (Thanks for the idea Fellrnr) after experiencing some blisters which definitely helped.

Over the course of the year I ran with less injury and with legs that felt fresher the next day and so I wanted to get to the heart of this magical, secret foam and half expected it to be wound with the fibers of a unicorn horn. 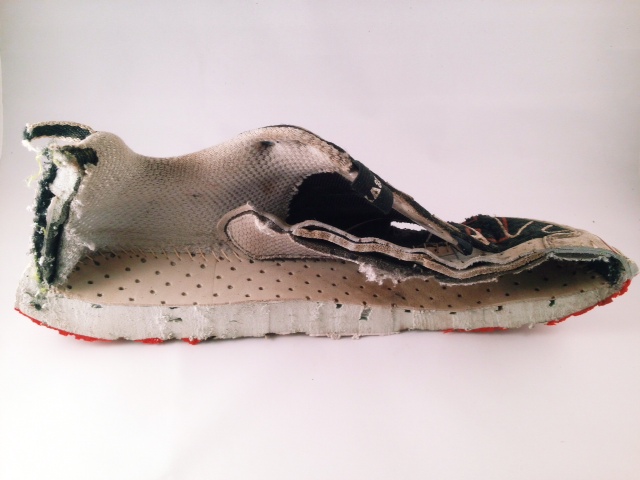 1. Crazy outside but sane inside: As you can see in second photo in this post, the outsides of the shoe have a lot of visible foam. I think it stabilizes the wide sole, cups the heel and almost cradles the rest of the foot aside from simply giving Hoka One One shoes a very distinctive and recognizable look.  After slicing the shoe in half I realized that’s part of the secret: the shoe is a big party on the outside promising a different experience – and it is different ride: it is a wide shoe, it’s taller (although some of the height appearance may be a trick on the eyes because of the tall foam on the outside) and the cushioning is pretty luxurious, especially at the beginning. But looking at the cross-section it’s a lot more basic and definitely more akin to what you’d envision a “normal” running shoe to look like to the point of the above photo almost looking like it is another shoe. And for me, this combination of crazy but sane really works.

2. The heel to toe drop looks accurate: Hoka notes that the offset is about 6mm and while I didn’t measure it w/ calipers it’s far less drastic than it appears on the side of the shoe.

3. Well built: There are a few places where the foam was beginning to break down, especially under the ball of my foot which makes sense since I have high arches and tend to forefoot strike going down trails but for the most part the foam is in pretty good shape. Additionally, the upper is really well sewn and bonded to the mid-sole and withstood many miles of trails in all weather conditions.

4. It’s sort of minimalist!: Yes, there are big logos on the side of the shoe and some flexy structural rubber along with the foam on the sides but the cut view reveals some well executed simplicity. Well placed padding in the heel, nicely laminated fabric in the tongue, a fairly even layer of foam on the bottom and very little rubber on the out-sole keep things almost bauhaus looking at least when looking at the cross section.

5. Flex pattern: Under key areas of the shoe, like the forefoot, I noticed small cuts had been engineered into the foam. These slits appear to to help the foam flex and move with your foot in somewhat similar although reverse fashion as the Nike Free 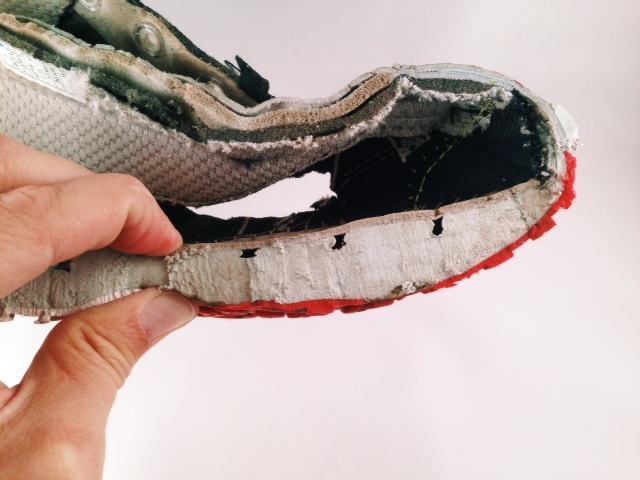 If you couldn’t tell by now, I’m a Hoka One One fan and before I hacked into these I had already procured another pair. It’s fun to know a little about what makes a favored object “tick” and I’m already thinking about which shoes I’ll cut in half next.

UPDATE: Check out the New Video of this hacked apart shoe here!

Follow FREAKRUNNER by email for automagic goodness. Hit the link at the top of the sidebar if you please.

63 thoughts on “Shoe Review: The Secret I Learned by Cutting My Hoka Evo Stinson Running Shoes in Half”