I got a new knife for Christmas which would have made things a little easier for the review of this pair of Altra Lone Peak 1.5s! I love this shoe so this one hurt a little bit.

Last Fall I ran a 50K in Moab, UT and there were three types of shoes that seemed to be on most of the competitors feet: Hoka One One Evo Stinson, Brooks Cascadia and Altra Lone Peak 1.5. All three of these are in my rotation so that may be part of why I noticed so many of them (like when you buy a silver car and then realize that everyone has one) but the Altras are pretty hard to miss because of the following:

The claimed wide toe box is really what drove me to cut my shoes in half. I had put quite a few miles on them and they do feel comfortable but I wanted to see if they really were that much different.

Altra Lone Peak 1.5 Versus Hoka One One Evo Stinson

Since I had already massacred the Left shoe of my beloved Evo Stinsons as noted here and here, I had no qualms about cutting the right shoe apart to compare it to the Lone Peak. Cutting the Lone Peak in half was painful as it’s definitely one of my favorite pair of running kicks but it was also fun. As I measured the shoes I began to see some interesting differences.

I measured the forefoot at 5mm increments to get a feel for how they compared. At first the differences looked very minor but upon closer inspection the contrasts were pretty interesting. 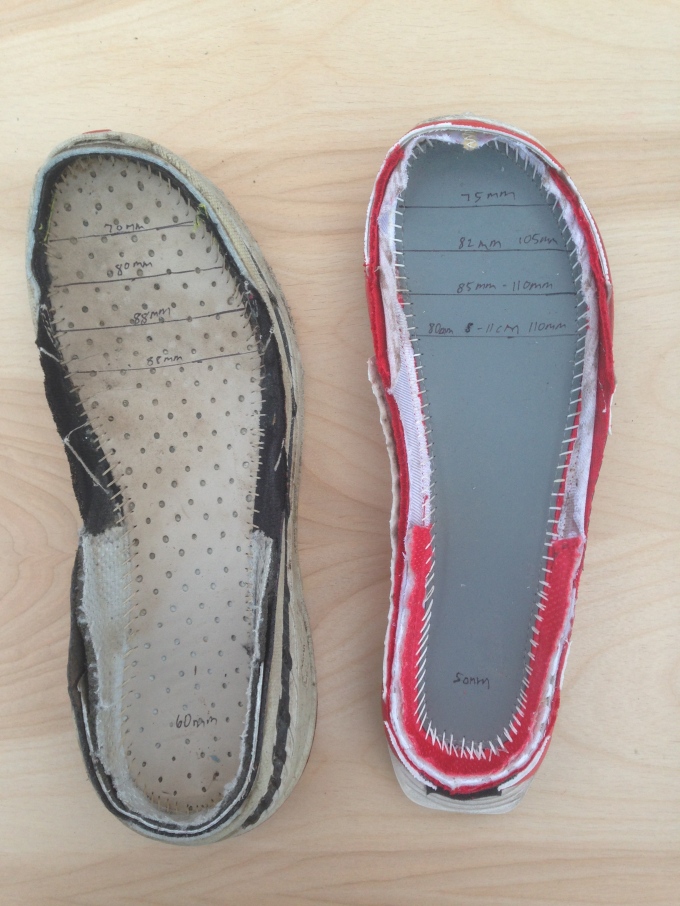 Tired of reading? Here’s a video of the whole thing!

Altra Zero Drop is a brand on the rise and it’s obvious that they are forging their own path in a crowded space. I’m looking forward to more from them in 2014!

27 thoughts on “What I learned by slicing my Altra Lone Peak 1.5 in Half: Shoe Review + Video”